SRP generates electricity from a mix of renewable sources like solar, geothermal, biomass, wind and hydropower. To ensure our ability to meet high demand for power at all times, including during Arizona’s hot summers, we also rely on traditional generation sources, such as coal and natural gas. These sources are the reliability backbone of the power grid.

We also buy and sell excess energy on energy markets as needed. 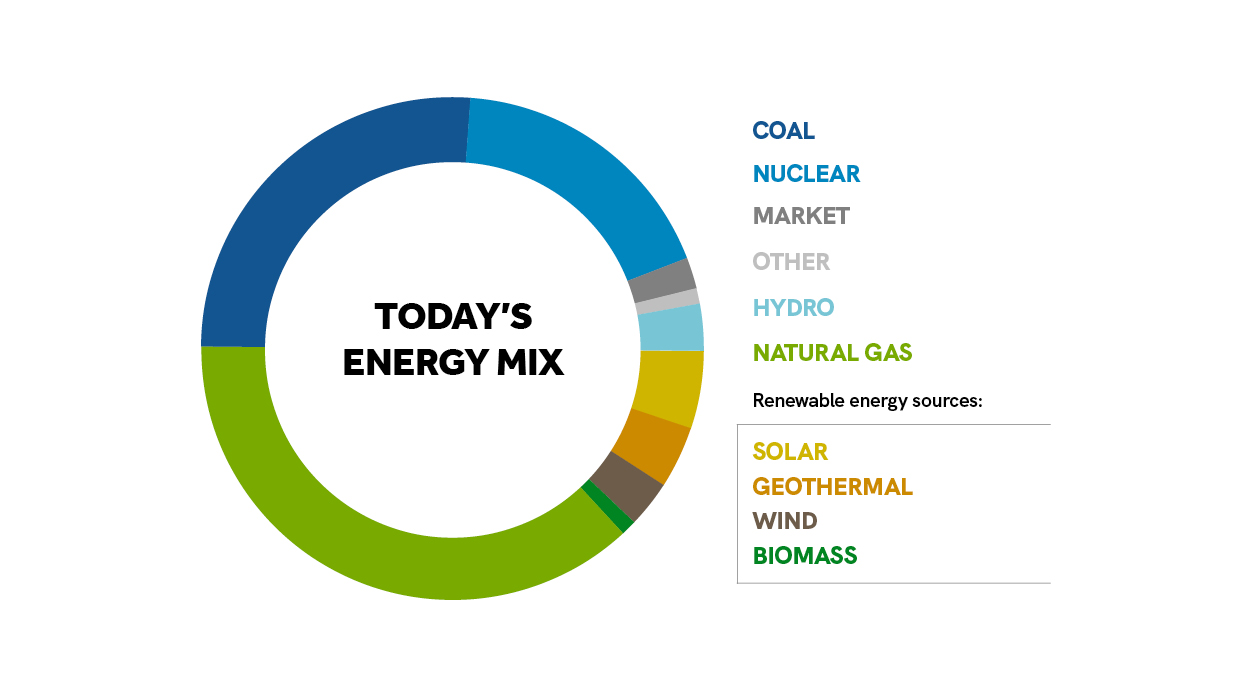 Cleaner energy sources for the future

While more and more of our energy mix will be renewable moving forward, we’ll still have natural gas and nuclear power sources so that we can provide dependable and affordable power.

This robust energy mix helps strengthen and protect our power grid during the hot summer months, when the Valley’s energy needs are at their highest.

SRP operates and participates in a number of major power plants and generating facilities in Arizona and the Southwest. These generating stations use fuel, steam and nuclear reaction to create energy.

Learn about each generating station below.

Arizona Falls is formed by a natural 20-foot drop along the Arizona Canal. The plant generates up to 750 kilowatts of carbon-free electricity, which can power up to 150 homes.

The roof of the turbine building and adjacent shade structure house solar panels to power ceiling fans on the public deck. The electricity generated by the plant and solar panels is also fed into SRP's grid.

Arizona Falls is located at G.R. Herberger Park, 56th Street and Indian School Road, and is open 24 hours. The main attractions are three waterfalls, a shaded viewing room and a pedestrian bridge.

Located on the Salt River Project Main Campus, the Crosscut hydroelectric power plant is on “water order” only – water only runs through the plant when water users order their water shares, and the plant only runs if the water shares released are large enough to operate the unit.

Horse Mesa Dam is home to three hydraulic turbine-generator units rated at a total of 32 MW plus one reversible pump-turbine (pumped storage) unit rated at 119 MW. The pumped storage unit was installed in 1972 and is capable of either generating electricity or using grid power to pump water onto the upper reservoir, to store energy for later use.

Mormon Flat Dam is named after nearby Mormon Flat, a place where pioneers from Utah stopped to camp on their way to the Valley. The dam, built between 1923 and 1925, stands 224 feet high and 380 feet long.

The dam has one hydraulic turbine-generator rated at 11.5 MW plus one reversible pump-turbine (pumped storage) unit rated at 55 MW. The pumped storage unit was installed in 1971 and is capable of either generating electricity or using grid power to pump water onto the upper reservoir, to store energy for later use.

The Theodore Roosevelt Dam, named after the 26th President of the United States, was among the first projects authorized under the Reclamation Act of 1902, after farmers in the Salt River Valley placed their land on collateral for funding. As completed in 1911, the dam was a dry masonry structure made from large, irregular blocks, which in total stood 280 feet tall. Behind the dam is Roosevelt Lake, the largest reservoir along the Salt River.

As envisioned, Roosevelt Dam provided several benefits including water storage, flood control, hydropower, and recreation, all of which contribute to economic growth in Central Arizona.

In 1989, the Bureau of Reclamation began a project to increase water storage capacity and overall safety of the dam. In addition to raising the original structure and encasing it with concrete, new spillways were installed, power generation was updated, a new bridge was built allowing State Route 188 to be realigned off the dam, and new recreational facilities were created.

Completed in 1996, the modern-day dam stands at 357 feet with a length of 1,200 feet, has a reservoir capable of holding approximately 1.6 million acre-feet, and can produce up to 34 MW of hydropower from a single hydraulic turbine-generator.

Constructed in 1981, this plant is located on a 35-foot drop in the South Canal in Northeast Mesa, just below the head of the Eastern Canal. Its generating capacity is 1.4 MW.

Stewart Mountain Dam is named after Stewart Ranch, which used to be located nearby. The dam was built between 1928 and 1930 and stands 212 feet high and 583 feet long. A single hydraulic turbine-generator with a maximum capacity of 13 MW operates based on water order.

The station normally burns natural gas but can burn oil in the event of a natural gas supply shortage. Agua Fria units are used to supplement base-load plants and add additional power during peak demand. The combustion turbine units provide a quick source of electricity, capable of producing power within 20 minutes.

Adjacent to Agua Fria is the Bolster Substation, a 25 MW battery storage facility made up of a series of Tesla Megapacks that are connected directly to SRP’s energy grid. It’s the largest stand-alone battery storage system in Arizona.

As the name suggests, Coolidge Generating Station is located in Coolidge, Arizona. It has a capacity of 575 MW from 12 aero-derivative turbine units.

SRP uses the energy output from Coolidge to balance electrical load during peak power usage. Construction began in August 2009 and was completed in May 2011.

Fun facts about the station:

Located in Casa Grande, Arizona, the output of combustion turbines can vary at different times throughout the year.

The nominal output for this facility is 577 MW. With its proximity to metropolitan Phoenix, Desert Basin increases reliability long-term. Mindful of Arizona's precious water resources, the plant is designed and equipped to use renewable water supplies, including reclaimed wastewater.

Construction began in 1999 and went commercial in October 2001. SRP purchased the plant in October 2003 from Reliant Resources, Inc. at a cost of $288.5 million.

Located in Tempe, Arizona, and owned and operated by SRP, Kyrene has one combined-cycle, two steam and three combustion turbine generators. Kyrene can burn either natural gas or oil, depending on availability, cost and environmental restrictions.

The station has a capacity of 521 MW from six units; 106 MW from two original steam units, 165 MW from three combustion-turbine units and 250 MW from one combined-cycle unit.

Even though Kyrene is SRP's oldest operating steam plant, it remains a quick source of electricity. Unit 4 is a combustion turbine capable of producing power within 20-30 minutes; Units 4 and 6 are “quick-start” turbines that can produce power in less than 10 minutes, adding critical power to meet peak demand.

Plant construction began in 2001 and the plant began generating power in 2003.

Located in Gilbert, Arizona, the Santan Generating Station is a mix of new and old power generating units that are fueled by natural gas. It is owned and operated by SRP. Santan is a relatively quick source of electricity, it’s capable of producing power within 20 to 60 minutes.

The Dry Lake Wind Power Project, located near Heber, Arizona, is the state's first commercial-scale wind farm. The project is situated on a combination of private, state and Bureau of Land Management public lands.

The project is operated by Iberdrola Renewables and SRP has an agreement to purchase 100% of the plant's electrical energy output.

The plant is home to innovative environmental control equipment, including electrostatic precipitators to control fly ash, scrubbers to remove sulfur dioxide (SO2) and a water reservoir that’s lined to help recover and contain process waste. Unit 2 also has a Selective Catalytic Reduction (SCR) system to remove NOx and plans to have an SCR installed on Unit 1 by the end of 2025.

SRP owns a share of this station (29% of Unit 1 and Unit 2) located near Craig, Colorado. It has a capacity of 1,283 MW from three units. Each unit is rated at about 428 MW; SRP receives 124 MW each from Unit 1 and Unit 2. Tri-State is the operating agent for the Craig Generating Station.

Units 1, 2 and 3 have been decommissioned, while Units 4 and 5 are shared by multiple power providers:

Springerville Generating Station (SGS) is located near the town of Springerville in Arizona. The plant is operated by Tucson Electric Power and has 4 units. Units 1 and 2 provide 380 MW apiece. Unit 3, which began operating in 2005, contributes another 400 MW. And SRP-owned Unit 4, which was completed in 2009, adds another 400 MW, bringing the facility's expected capacity to 1,560 MW. Springerville Unit 4 was built with air emission controls to meet the EPA’s Best Available Control Technology (BACT).

Discover solar around the Valley

See where these units are located and how much energy they produce.

Our plan to decommission coal

SRP is committed to reducing our carbon emissions, and we are  starting to decommission certain coal-fired plants. The plan includes Hayden in 2027, Craig Unit 1 in 2025 and Unit 2 in 2028, Four Corners in 2031 and Coronado no later than 2032.

Ensuring that the Valley’s energy future remains reliable requires energy experts and communities working together. Learn about SRP’s energy plan for the future.

Protecting and preserving natural and cultural resources is at the core of SRP’s mission. Learn more about SRP’s environmental programs here.

SRP is working toward a sustainable future for the benefit of our customers and the communities we serve. Learn more about our sustainability goals here.